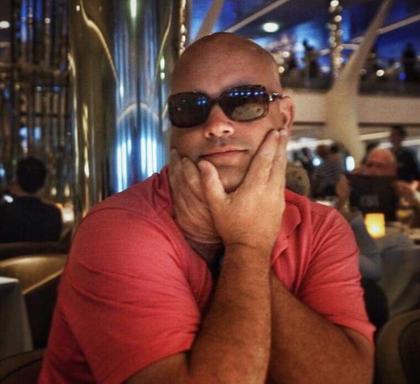 Kirk will share his art with us as our first Artist in Residence for the 2018 Season. Kirk's residency at the Lighthouse Studio  will be from June 11th - June  17th, 2018. Kirk has been very involved throughout the years lending his talents to serve the arts within our community, including KUSD Theatre programs.

Kirk Robertson is a Kenosha resident. He holds a Bachelor’s degree in psychology from Carthage College and has been married for nearly 24 years. He and his wife have one son (currently pursuing a BFA in Musical Theatre at Otterbein University).

Kirk usually doesn’t take himself too seriously. He’s the first one to laugh at the dumb stuff he does. He laughs a lot. As far as being an “artist,” it was intimated to him, rather snottily, some time ago, that he’s not...and that stuck. He’s been somewhat reluctant to share ever since, but he’s looking forward to ripping that band-aid off and sharing this summer. Be nice to him, people. He’s a crier. Seriously, nobody wants to see that.

What does “art” mean to me?
Art, in its varied forms, is what keeps life from being boring and awful, both in its creation and its consumption. It allows us to live out loud, to revel in the way others see the world, and to take comfort in knowing there’s someone out there who hears my silence just as clearly as my shouting.